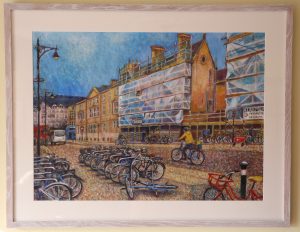 This is part of a series I have been doing called ‘Oxford Under Wraps’ and shows Broad Street with Balliol College under wraps with cyclists and the usual traffic and people passing by. I wanted to show Oxford as a working city not just prettified for tourists.